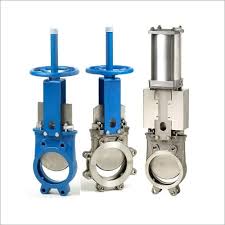 Knife valves are capable of being mounted on the pipe system regardless of pressure direction. It is suitable for the use of liquids, muds and solids with a no-hole hole that can provide excellent flow properties. Friction value is minimized in knife valves that can be produced from cast iron, ductile iron, steel, stainless steel, duplex, super duplex and hastelloy.

Knife valves have a sensitive door edge. Knife valves produced in a structure that reduces operational force are leak-proof in both pressure directions. In knife valves that provide control of fluids such as fiber, dough, undesired effects such as clogging or adhesion are minimized thanks to the blades. Sealing feature can be increased depending on the type of gasket used in knife valves.

Knife valves feature Wafer, Lug and Double Flash connection. It is produced with manual, electric, pneumatic and hydraulic drive unit. The nominal diameter of the knife valves that can be operated for (-50 ° C) to (+1000 ° C) is between DN 50 and DN 1600. Nominal pressure is between PN 10 and PN 100. Materials such as cast iron, duplex and super duplex, ductile iron, monel, hastelloy, steel and stainless steel can be used in the manufacturing of knife valves.

Knife valves are frequently used in industrial areas such as food industry, iron and steel, chemistry and treatment plants. Thanks to its leak proof feature, preferred valve valves can also provide advantages in terms of ease of use and maintenance costs.