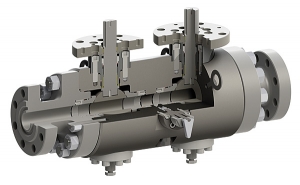 It is like having three valves in one of the Double Block and Bleed valves.

API 6D defines the DBB valve as “a single valve with two seating surfaces in the closed position providing a seal against pressure from both ends of the valve by draining / discharging the space between the seating surfaces”.

The DBB valve has several different styles. In a style like J-Flow Controls, there are two independent seating valves with a bleed or drain valve inside. This configuration is called double isolation and bleeding (DIB). The DIB valve can isolate both sides (two way) of the valve to ventilate or to empty the cavity and to isolate the pipes.